My daughter and I attended the last day of the Frida Kahlo exhibit at the Portland Art Museum. Driving in was a lovely, cool June day, warm enough to smell the hot concrete on the ground but the recently rained on grass as well. I discovered Frida as a teenager, years before the Selma Hayek movie Frida was released. Growing up in a small town in rural New Mexico, no one except art and history nerds knew who she was really. I was fascinated by her connection to nature, her own pain, and revolutionary politics.

I had never really considered it before the exhibit, but Frida was also very much a fashion model and a thoughtful stylist in many ways. I think white liberals love her for her Indigenous, cultured and worldly aesthetics. But they tend to minimize her politics. Her face adorns countless tchotchke type goods.

My daughter and I appreciated that they also included the artistic ecosystem that Frida emerged, including Diego Rivera and the broader context of Mexican Modernists, including artwork by Manuel and Lola Álvarez Bravo, Miguel Covarrubias, Gunther Gerzso, María Izquierdo, Carlos Mérida, David Alfaro Siqueiros, Juan Soriano, Rufino Tamayo and others.

One thing I noted was how toned down her politics were presented. She was a communist and a revolutionary who joined the Mexican Communist Party in the 1927, which is how she connected to Diego Rivera. This was severely minimized, despite Frida’s life life commitment to communism and internationally known affair with Leon Trotsky.

The exhibit showed her early sketching to her mixing of Pre-Columbian and Catholic influences. I was curious how I would feel about seeing her work in person after seeing prints for years of my adult life. I was not disanointed. Her work was stirring though familiar.

Hundreds of people, many of whom had probably never been in art gallery visited. Of course, being Portland, Oregon most were white. People observed reverently and it reminded me in a positive way of a religious like awe for Frida. The large crowd size spoke to how deeply beloved Frida Kahlo is. She was truly the People’s Artist to the day.

CAN WE SAY that Buddhism is feminist at its core? There may be points of convergence with feminist analysis in Buddhist sources, but there are also plenty of misogynist statements. How do we determine which is more foundational? And, more importantly, who decides? While I’m not convinced that there needs to be one version of authentic Buddhism to make productive use of Buddhist sources in advocating feminist goals, there are certain pitfalls in a discourse of authenticity, even when used for laudable ends.

I appreciate the nuance that Alexis Shotwell brings to the category of feminism as she invokes Rita Gross’ early and impactful contributions to feminist theology. She starts by reviewing Gross’ arguments for the compatibility of Buddhist and feminist thought and then expands on these to suggest intersectional analysis as the most appropriate form of feminism for Buddhist communities in North America, presumably those that emerged through the upsurge of converts in the 1960s and 70s.

Reflecting on the potential for “doctrinal coherence” between Buddhism and feminism, Shotwell poses the question: “but what sort of feminism?” To offer further nuance, I address an equally salient question: but what sort of Buddhism? With that question, I point to the diversity and multivocality of Buddhist doctrine and practice across Asia and suggest that, at this point, feminist analysis needs to move beyond positing a “non-sexist core” within Buddhism and find ways to retrieve resources that do not rely on essentialism.

I came across this helpful short biographies of female Zen Ancestors. Many of which are known thanks to the work of Sallie Jiko Tisdale such as this and her book Women of the Way. 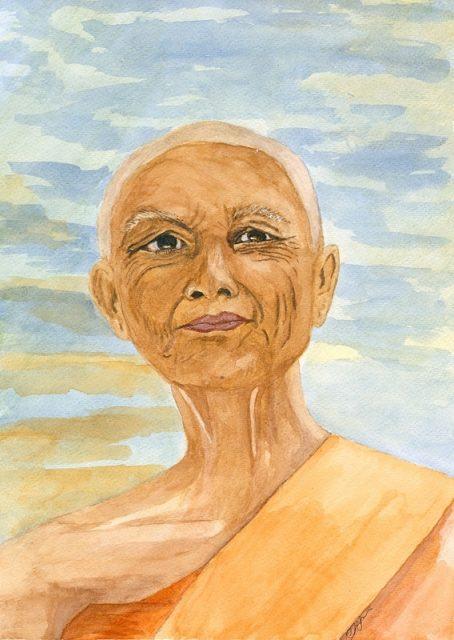 Pajapati (later known as Mahapajapati, or Great Pajapati) was the aunt of the historical Buddha, Siddhartha Gautama, she was also his mother figure as she helped raise him after the death of his mother and Mahapajapati’s sister – Maya, who died shortly after Siddhartha’s birth. Around the same time Mahapajapati had also given birth to Nanda and later a daughter, Sundari. Both Maya and Mahapajapati were Koliyan princes and were both married to Siddhartha’s father Suddhodana, a Sakyan leader. She was said to have been born in Vaishali – now Bihar in Eastern India and is primarily remembered as the initiator of the Order of the Bhikkhuni – the sangha of Buddhist nuns and was herself the first bhikkhuni. Some articles even cite her as leading the first women’s rights march in recorded history. What intrigued me about Mahapajapati was that she is the 7th name we chant at Dharma Rain from the Line of Women Ancestors after Prabhūtā.

“Listen with your body, your heart, your eyes, your energy, your total presence. Listen in silence, without interrupting. Fill any spaces of silence between you with love. The moments when I can listen like this, to my children or to anyone else, are rare.  Yet these words inspire me with a sense of possibility, and for this I am grateful.”

All-accepting Kanzeon is the gateway to buddha mind. In
Kanzeon we are one with buddha; in cause and effect, related to
all buddhas, to dharma and to sangha. Our true nature is eternal,
joyous, selfless and pure.

I started feeling unwell Sunday night, and still felt that Monday morning and decided to stay home from work. This afternoon I meditated for 25 minutes, and then went through my Zen documents – my Precepts and Wagessa, my wedding ceremony, and my Lay Disciple documents. I imagined the hundreds (thousands?) of sticks of incense that I have burned. Time has passed and yet this practice is still the same practice. Settling the mind, sinking into silence, and being with my life as it is – the same practice it was at 16 as it is at 38.

Gnostic Gospel of Thomas as Spoken by Jesus, quoted in The Mind of the Clover by Robert Aitken

I performed my Jisha duties Sunday and had time to do sanzen with the Abbot. After we finished and walked back to the Sodo I was looking at the ground, at nothing in particular, perhaps the patterns of rocks and dirt on the ground. Abruptly but quietly the Abbot stopped and pointed to a raptor perched on a stub only feet from us. It was strikingly similar to an experience I had at Cultivating the Way, there I was following a teacher who stopped and pointed to the Moon that had just appeared from the clouds – suddenly, strikingly.

Saturday many of us with roles or leadership attended a DEI training. It was fine, but I didn’t take a lot from it. It spent the entire time focusing on (our/mine) white feelings, and spoke of nothing we could do about oppression. It felt inadequate.

The lineage classes are going well. We just wrapped up the Literary period in China, finishing with Rujing who would teach Dogen. I also presented on my topic – Mahapajapati, the women who raised the Buddha and helped create the Order of Buddhist Nuns. The Buddha originally (allegedly) refused to allow the women to join, but reluctantly agreed when Ananda challenged the Buddha. Mahapajapati became a highly realized person and leader within the Sangha.